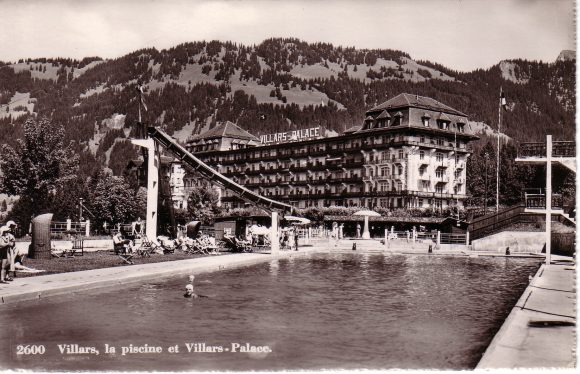 Arriving in Villars by car, bus or the jerky and charming train: You can’t miss the Villars Palace.  Since 1913 it has been enthroned majestically above the village, worthy of a Grand Hotel. From the small train station, opened 1913 as well, it is only a few minutes’ walk to the Palace.

The permanent road to Villars, completed in 1866, favoured and even made possible tourism in Villars. The initiation of this project is attributed to François-Philippe Roud-Gaud, the “Colonel Roud”, the owner of a small inn in Chesières. 150 years ago, Villars changed completely: the hitherto rural alpine village became a tourist destination. In the same year, 1866, the hotel “Le Grand Muveran” was opened, whose later owner, Charles Genillard (1869 – 1922), also initiated the construction of the Villars Palace. The railway line Villars – Bretaye, which opened in the same year as the Palace, further strengthened Villars as a tourist destination.

In winter everything is covered in white – as in earlier times when the noblemen of the European upper class loved to stay in the Grand Hotels of the Alps, even for several months. The guests of the upper educational class sought escape from their hectic city and working life or went on cures in the fresh, pure air of the Alps. So it was not uncommon for the stays to serve curative purposes with sports training, a healthy original diet and unspoilt nature. These wellness activities combined with an all-inclusive package promised a paradise on earth.
Romantic literature on the soothing stay in the Alps also contributed to a real tourism boom in the first decades of the 20th century, creating many Grand Hotels in the Alps operating as sanatoriums for the wealthy population. In Thomas Mann’s novel “Der Zauberberg” («The Magic Mountain »), published in 1924, a Grand Hotel (although in Davos) serves as the background this kind of a sanatorial spa stay, which was, of course, literarily exaggerated.

The construction of the Palace began in February 1912. The consecration took place only 15 months later: on Christmas Eve in 1913. At the same time the train station of Villars also opened, which was undoubtedly a lucky coincidence, because the railway line made the arrival of the guests much easier. The architects were Edouard Borel and his son Charles Borel, both from Bex. The Villars Palace offered its guests the very latest comfort at that time: Hot and cold running water and telephones in the rooms. Wooden balconies allow a unique view over the Rhone valley and the mountains opposite. Also concerning its equipment no wishes of its guests remained open: 6 floors, each room with balcony, in addition generous lounges and halls for different occasions. The interior and the furniture also corresponded to the latest fashion. The building is now a listed building.

The Villars Palace seems to have fallen out of time, but its vintage charm nowadays invites guests even more into the “Golden Age”.

Class has no past. Come to discover its splendid beauty!